A broad screen of CSF samples using 11 Olink Target 96 panels analyzed patients with Alzheimer’s Disease with dementia, patients with mild cognitive impairment and who are positive for β-amyloid (MCI Aβ+), and patients with dementia but are negative for β-amyloid (Aβ-). Over a hundred differentially expressed proteins were shown to be dysregulated, and from this data an 8-marker and a 9-marker Olink Focus Panel were designed to discriminate between these three groups with high accuracy (AUC of 0.8-0.99) in an external independent cohort. These marker panels have real diagnostic potential as well as utility in design of clinical trials of drugs targeting various pathological mechanisms of Alzheimer’s Disease.

The multifactorial nature of Alzheimer’s Disease: a spectrum of diverse pathological pathways

Alzheimer’s Disease (AD) and related dementias are the cause of 6.5 million deaths in the United States every year, and the National Institutes of Health estimates this number will double in the next four decades.1 Another study has found individuals in their 70’s have an almost one in three chance of getting Alzheimer’s Disease, and these were individuals who were born in the 1920’s. Those born after 1920 naturally will be living longer, and thus are at an even higher risk.2

Alzheimer’s Disease is the most common age-related dementia, accounting for 60% to 80% of patients with dementia. However, the symptoms and pathology of AD overlap the other two causes of dementia, called dementia with Lewy Bodies (DLB) and frontotemporal dementia (FTD); it is estimated that misdiagnosis of AD is up to 30%. This misdiagnosis challenges the effectiveness of any clinical trial, and a better understanding of the molecular pathology of AD is critically needed.

Current markers of AD include presence of the protein Aβ42 or a ratio of proteins Aβ42/40 reflecting a later stage of AD, and hyperphosphorylated tau (p-tau) or total tau (tTau) for early diagnosis of AD. A weakness of these two earlier markers of AD is their lack of discriminating power for non-AD dementias, as well as its inability to characterize the multifactorial nature of AD pathology. New markers are needed, not only for characterizing the biological definition of AD, but also to reveal new potential drug targets, as well as provide surrogate endpoints for clinical trials.

Two goals of this work: To define new CSF proteomic changes underlying AD, and to identify and validate biomarkers to aid in early and specific diagnosis of AD

The researchers used eleven Olink® Target 96 panels (a total of 979 proteins) to assess 797 individuals in their discovery cohort[3] (numbers listed below in Figure 1). After identification of over 100 dysregulated proteins, a classification model separated clinical groups with very high accuracy (Figure 2). The Receiver Operator Characteristic (ROC) curves were determined to have an area under the curve (AUC) ranging from 0.85 to 0.99.

The number of significantly change markers by CSF sample type, adapted from reference 3.

Four clinical groups with both unique and overlapping proteins

The four clinical groups – a group with mild cognitive impairment and positive for β-amyloid [called MCI(Aβ+)], a group with AD, a group with dementia but not AD, and a control group – had proteins unique to themselves, as well as other proteins in common among them. 281 proteins were discovered in the AD group; 189 of these 281 were abnormal only in the AD dementia stage, and of these 63 were also dysregulated in the MCI(Aβ+) group.

A classification challenge: what is the minimum number of markers with the maximum discriminating power?

A data-driven model determined the smallest protein signature that gave the highest discriminating power. They used a “penalized generalized linear modeling with an elastic net penalty (a linear combination of lasso and ridge penalties)”3 and the performance of each selection was tested though a fivefold cross-validation repeated 1,000 times.

By modeling multiple biomarkers simultaneously, those with the highest power to reproducibly discriminate between classes were then selected. This is in stark contrast to single-marker analysis, which does not take into account the biological relationships between the markers in the pathobiology of disease.

The authors point out that  individual markers have a limited magnitude of change, and  are therefore of marginal utility as a biomarker of disease. with a large sample size (which this study fulfills) and “robust high-throughput, reproduceable and translatable technologies”3 they are able to achieve discrimination between the different stages of AD.

Having identified fifteen proteins that can distinguish between the three affected groups [that is, MCI(Aβ+), AD, and Non-AD Dementia to healthy controls], a custom Olink Focus panel was constructed. These fifteen proteins were divided into two groups, with two proteins (ABL1 and ITBG2) in common among the two.

For those unfamiliar with Receiver Operator Characteristic curves, they are a measure of both specificity and sensitivity captured simultaneously, measuring false positive and false negative rates, and an AUC of 0.96 indicates extremely high accuracy. They applied this custom panel to a second independent cohort (figure 3) and still achieved an AUC of 0.94. 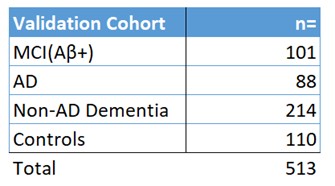 It is not uncommon for an assay with potential diagnostic usage to perform very well with the set of samples the biomarkers were discovered with, but when the assay is developed for a focused set of biomarkers there is often a clear degradation in accuracy once an independent set of samples are tested. This is due to both a change in platform (from a wide biomarker screen to a narrowly-focused set of chosen biomarkers) as well as the independently collected and independently measured samples.

A definitive conclusion and next steps

The authors address something they call the “cross-technology gap often encountered in biomarker studies”, where a technology used for discovery of a biomarker is not practical nor economical to consider for analysis of only a dozen or more biomarkers for routine analysis and potential diagnostic application. However, in this case they were able to take advantage of a broad panel of eleven Olink Target 96 panels, a total of 979 proteins, select the 15 proteins of interest and have the same Proximity Extension Assay technology applied on a much lower scale, with comparable sensitivity and specificity against an external cohort.

They state: “This study provides insights in to the multiple and specific protein changes underling the pathogenesis of AD and translates the multifactorial findings into practicable CSF biomarker panels.” They then conclude, “This study also highlights the effectiveness of our methodological workflow to discover and validate new biofluid-based biomarkers, leveraging the combination of large well-characterized cohorts with robust and translatable technologies.”

How the proteome behaves in healthy individuals

Proteomics
Welcome to the first post of the all-new weekly Olink to Science! Our customer survey revealed that you would like to know more about the many publications, research, and other science happening at Olink, therefore this blog aims to do just that: keep you informed on the exciting science taking place with our technology.

Protein biomarkers are crucial in early detection of cancer

Clinical research, Oncology, Protein biomarkers
A central premise of precision medicine is to identify biomarkers indicative of disease transitions early on. This is especially important in cancer where early treatment intervention could increase a patient’s chance of survival and reduce the probability of cancer recurrence.

Clinical research, Proteomics
The following study illustrates how transcriptomics and proteomics complement one another to clarify the pathology of a complex, and little understood disease. Atopic dermatitis (AD) is the most common chronic skin condition affecting up to 20% of children and 7-10% of adults, depending on the population.

Inflammation, Proteomics
Could food be used to fight chronic disease?

Oncology, Proteomics
'Ultimately, it is all about understanding and treating patients better in the future.'

Oncology
An earlier Olink to Science blog post covered some amazing research that found that certain blood protein biomarkers have the potential to predict cancer up to 3 years before diagnosis. This may also be the case for lung cancer, as detailed in a recent study by Dagnino and her colleagues, where elevated levels of CDCP1 were detected in participants of a cohort who later developed the disease.

Drug discovery & development
High-throughput multiplexed proteomic technology is leading the way to the latest developments in pre-clinical disease analysis in drug discovery. The pharmaceutical industry is now increasing its efforts in the discovery of novel drug targets by using protein quantitative trait loci (pQTLs), which allows for a more confident inference of disease causality and associated protein regulation.

Clinical research, Neurology, Protein biomarkers
A simple search of the term ‘scourge of Alzheimer’s Disease’ brings up over half a million website hits. A major disease, about 15% of us that reach the age of 67 to 74, and 44% of those 75 to 84 will develop AD.

Clinical research, Proteomics
Dr. Krolewski and his team at the Harvard Medical School found 56 proteins to be significant in diabetic kidney disease patients. Potentially, these could serve as prognostic biomarkers for disease progression and treatment response. This is how adding proteomics to the methodologies elevated their research.